If you like jumbotrons, monster trucks and supersizing your meal deal, then this is the fruit for you! 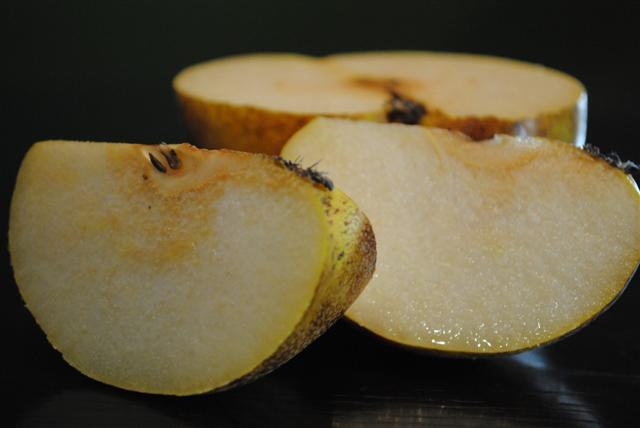 This pear is humongous. It would take three grown men to eat it in a sitting. Just ridiculous for a pear. Yellowish green skin and brown speckling with white flesh.

Crunchy, airy, slightly gritty, like munching on fine sandpaper only not so weird

Who would have guessed that this swollen ball of gritty neutrality would taste great? This pear is just a whole lot of fun with a spicy vanilla flavor upon first bite, fading almost immediately with no aftertaste. It made me want to keep biting in to it to get that first initial zing. Yum.

The following names all appear to be fairly interchangeable.  It is the variety that differentiates —  asian pear, nashi or nashi pear, African pear, Japanese pear, Korean pear, Taiwan pear, sand pear, apple pear, bapple, papple, bae li. So who knows what this one is. Let the following conversation illustrate the problem.

Updated 12/17
I sent the photos and description of this pear to a new friend at Kingsburg Orchards. After some asking around, she let me know that their best guess is that this is a Seuri Pear. From that and the descriptions here and here, I think they might be right. The only problem is that the Seuri is of Chinese origin and the purveyor was adamant this is Japanese, but I’m going to go ahead and trust the five generations of cumulative pear knowledge at Kingsburg Orchards on this one.