You would think that people would give me fruit to try all the time since I’m the Fruit Maven and all, but alas you would be wrong. Actually I am rarely on the receiving end of exciting fruit, which is ok I suppose since my close friends aren’t exactly as obsessed with finding the next great fruit as I am; And receiving fresh produce from strangers, particularly in the mail, is…well…a little disconcerting. Anyway, the other day my luck was all aligned with my chi and a new friend offered me some Anna Apples from her backyard. This particular friend is remarkably in line with everything I hold sacred. Case in point — I brought Hidden Rose apples and she provided the Annas and so we had a tasting of sorts. Then to really bring things over the top, she pulled out multiple types of tequila so we could do a tequila pairing test. Be still my heart…we were BFFs from that moment on (I think she currently sees me more as a stalker, but the jump to besties is a short one I assure you). 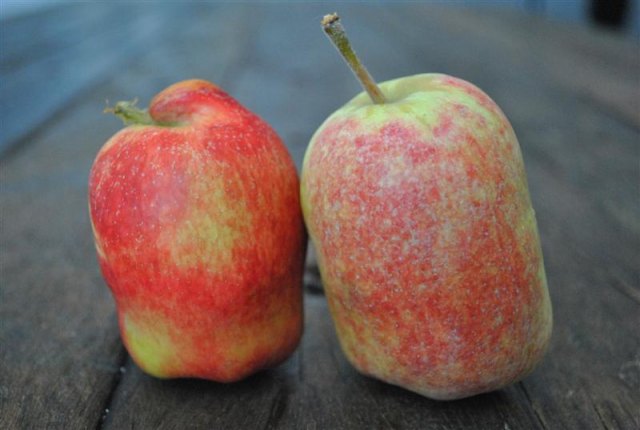 Anna Apples are tricky, in that one day they are crispy with a mild, fresh flavor (usually the green skinned ones) and the next they are headed straight toward mealy/mushy with a distinctly sweeter, nuanced flavor (the blushing red ones). The great thing is that you can appeal to all kinds of apple eaters if you have an assortment. Plus if you serve tequila shots next to them, no one will care one bit anyway. Also Anna trees often produce fruit a few times a year, not just in the late summer (their peak) — so you can have apples any old time with out having to store them for months on end. Awesome.

Green to red skin, with a tall, unusual cylinder shape like one of those goofy water snakes that slips through your hands and makes you feel slightly uncomfortable but you aren’t sure why (except we all know you kinda know why…).

Crispy or mushy depending on the stage of ripeness, both with a nice mellow amount of juice.

Low key, standard apple flavor that builds in complexity in your mouth if you pay attention to it. The nuances don’t scream at you though.

I love anything that has a non-standard shape or color, so this apple with its perky body stands out for sure. But the flavor is just ok and more middle of the pack than I was hoping. Nothing to complain about particularly, but nothing to brag about either.