Coconut is one of those funny foods that people tend to either love or hate.  I’m of course, in the love category. It’s fattening, decadent and rich and yet you can still call it “healthy”. What’s not to love?

Previously however, I had only ever had the brown husked coconut that is fairly common (at least in Hawaii and California- the two places I have most recently lived). It turns out that to my taste, this is the least appealing of those available. It is the oldest, or most “mature” as people these days like to say it. Speaking of which, did anyone see Tom Cruise on the Oscars this week? Has that man “matured” at all since his Risky Business days? Good lord, it weirds me out.  But while I could write an entire week of posts on the maturation issues presented so beautifully on the red carpet, I should probably stick with fruit. 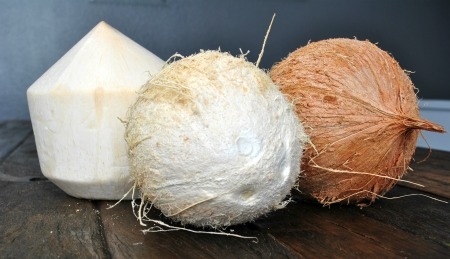 So there are three ages of the coconut fruit available in markets – young coconut (far left), the middle young white husked coconut and mature old brown husked coconut. These stages are what one would find inside the green outer husk from the coconut tree, if you were to be so lucky as to be there when they open them. The young coconut can only be harvested if someone climbs up and gets it right off the tree, whereas the other two (which are really more of a spectrum than concrete stages) are harvested after the husk falls and hits the ground. 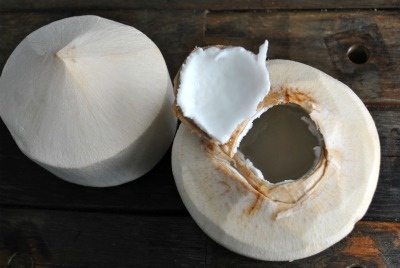 The texture of the flesh inside each coconut matches up with the age. The young coconut had soft jelly like meat that reminded me of cooked udon noodles and had the sweetest juice, aka coconut water inside. I scooped this flesh out easily with a spoon. The white husked coconut had thicker, dense meat that was moist and fresh with a floral coco-nutty fragrance. The final brown husked coconut had similar meat to the white, but it was dry and firm – great for grating! 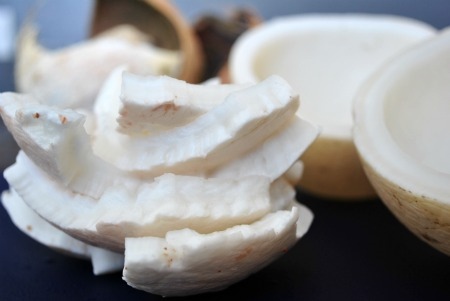 (Tip – to crack open the mature coconuts, it’s best to heat them. Don’t do what I did.)

So now I have to make a confession. While I do love coconut stuff, I guess I just learned that I don’t really love fresh coconut. It isn’t quite sweet enough for me and overall it has a salty quality that I don’t care for much, which is bazaar because I love me some salt. 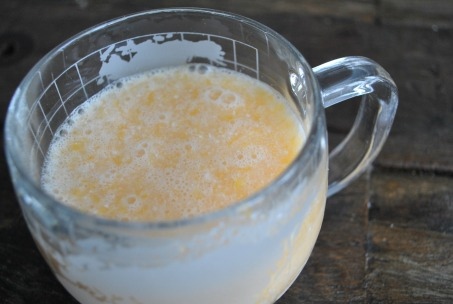 So…I did what I always do when I don’t particularly love a fresh piece of fruit. Turn it in to a cocktail of course! And then drink it from a mug — because I’m classy like that.

Place first three ingredients in a blender and blend. The result will have some texture to it. If you don’t like this, you can strain it first. Add shot of rum if using. Pour in mug, puff out chest and walk around your house like you own the place.
..