I keep hearing about the Warren Pear! The WARREN PEAR! Oprah likes it. Martha likes it. The LA Times likes it. It was starting to feel ridiculous how much I was seeing this new-to-me variety pop up everywhere, which of course made my cynical side come out in full force. Why would Oprah and Martha both suddenly learn about a specific variety in the very same month of the very same year? It’s weird and screams more of expert marketing than excellent fruit. But I noticed that my local favorite location for unique varieties had procured a few and so I popped over to give them a try. 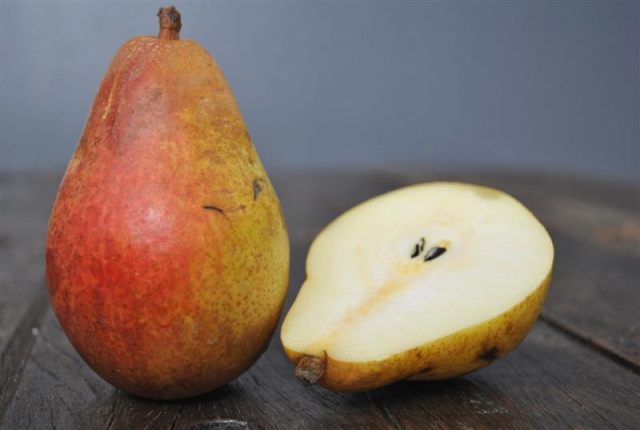 I guess I should step back and give an even bigger confession. I didn’t want to like them. I don’t particularly jump up and down about pears of any kind and there are only a few times a pear has wowed me. One being a Harrow Delight Pear that I tasted at a California Rare Fruit Growers convention. Don’t get any ideas with that statement. I am terrible at growing things and I didn’t go to learn – heavens no. I went for the fruit tastings and to meet some of the people that grow the fruit I happily consume. But that’s it. I think plants actually play dead when they see me coming because it is just so pointless for me to try. So there was this spectacular pear at the event and I just remember thinking – Wow! I have never tasted a pear like THAT. And I’ve never seen another one, though I haven’t tried. Like I said, I just don’t go out of my way for pears.

But back to the point – Warren Pears! Where would they fall on the spectrum? Let’s just say they are very very good and I certainly think you should consider sending them as a gift to someone this season, the way Oprah recommends, but for my taste they ended up sliced and turned in to dried fruit slices. Other reviews state they aren’t grainy, but mine were. So I’m not sure what happened there. Don’t get me wrong, these ARE the best darn pear slices I have ever tasted, but just a fruit slice nonetheless. When I truly love something, it doesn’t last long enough to make it to the oven.

Very mild, sweet vanilla with a hint of cinnamon or maybe even soft clove. Not sure.

Gorgeous flavor that starts out with a full vanilla, almost honey taste and then sinks in to a far more complex, spiced flavor.

A great pear with complicated flavor and a rich texture. Very good but not worth going out of your way to find in my opinion. There are lots of pear varieties that are much easier to get and good enough. See: Seckel, Comice, Starkrimson, Bosc, and Bartlett for starters.

Has anyone else tried the Warren Pears? What did you think? I would also love to hear about your experiences with something everyone just LOVED and you thought was just “good” or “ok” or even “bad”.