The apple tasting included six different examples from the antique russet apple category, a type of apple I had never tried before. These are not your typical waxy skinned, smooth apples but more of the charming older distinguished gentleman of apples. Some were a little worse for wear, but most were delightfully rustic. While there were those that divided the group like the Roxbury Russet getting 5 stars by some and 1 star by others, the Pitmaston Pineapple Apple was a universal high scorer by all tasters so it seems like a great introduction to this group.

The picture below was not taken by me as my camera was not working this weekend. I found this on Google images and can’t really figure out how to source it. I’ll try to replace it soon. 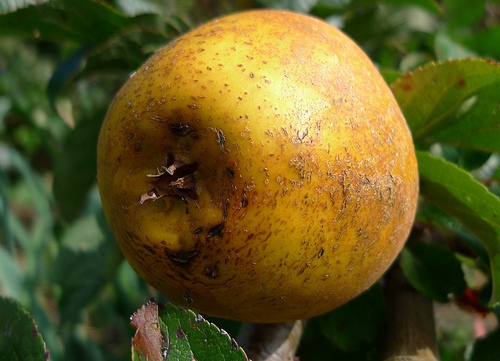 Light and fresh but not particularly aromatic.

Firmer than other russets but not what I would call crispy. Some testers absolutely loved the firm, dense texture.

Tart, bright, zippy and YES, a bit reminiscent of pineapple.

Overall this apple was delightful and completely deserving of having pineapple in the name. That being said, please pause and say the name of this apple out loud. “Pitmaston Pineapple Apple”. Seriously. Try it. You’ll feel ridiculous. “I’m eating an apple apple”. My two year old self is loving this. APPLE APPLE. Apple APPLE!! APPLE. (Yes, I’m this nerdy – as if you didn’t already suspect that when you found out I write a blog about fruit.)